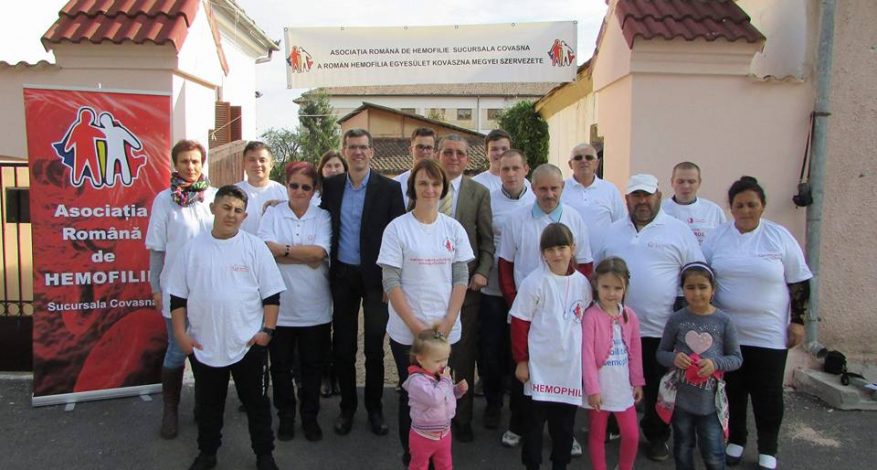 Annually, starting with 2009, the Romanian Hemophilia Association – Covasna Branch organizes the Family Day. The purpose of the meeting is based on the need to strengthen the links between the patients suffering from this disease and their families.In the opening, Mr. Trucki Mihaly, the president of the branch greeted those who met at this celebration, after which Mr. Andrei Daniel, the president of the national association, presented the situation of haemophilia in the country. It is normal for us to still be dissatisfied, says Daniel, but the treatment of medicines has been significantly improved for those suffering from this disease, especially for children through the prophylaxis program, due to the ongoing efforts and campaigns organized by the Romanian Hemophilia Association addressed to the Government of Romania. He showed that although there are few hemophiliacs in number, they can put pressure on the Government of Romania by organizing conferences and public awareness campaigns. He had words of appreciation for the activity of our branch and shared books and brochures on the hemophilia of the families present.
Members of the local branch also participated in these events of the Romanian Hemophilia Association.
Mr. Kiss László, Covasna County Clerk, presented the report of the local branch. Mr Kiss emphasized the unity of those suffering from this disease. The association must continue to fight, so that today’s youth will not become disabled people of tomorrow, no person with haemophilia will not live in suffering, pain, disability or with the prospect of a shorter life. Covasna branch has always been a bridge between the two national associations. With the new elections a lot has changed in the Hungarian association, but at the meeting the desire to continue the cooperation between the representatives of the haemophilic ones in Romania and Hungary was affirmed.
Further, Daniel Andrei, President of ARH, as well as Péter Nagy and Gömbös Erzsébet, members of the Hungarian Hemophilia Society board answered the questions of those present.
Mrs Gömbös was very impressed by the fact that the little ones have prophylaxis in Romania and are holding our fists to achieve the same with adults.
The second part of the meeting was intended for the joy and celebration of the event. Families discussed their problems, made new friends and acquaintances, played football.